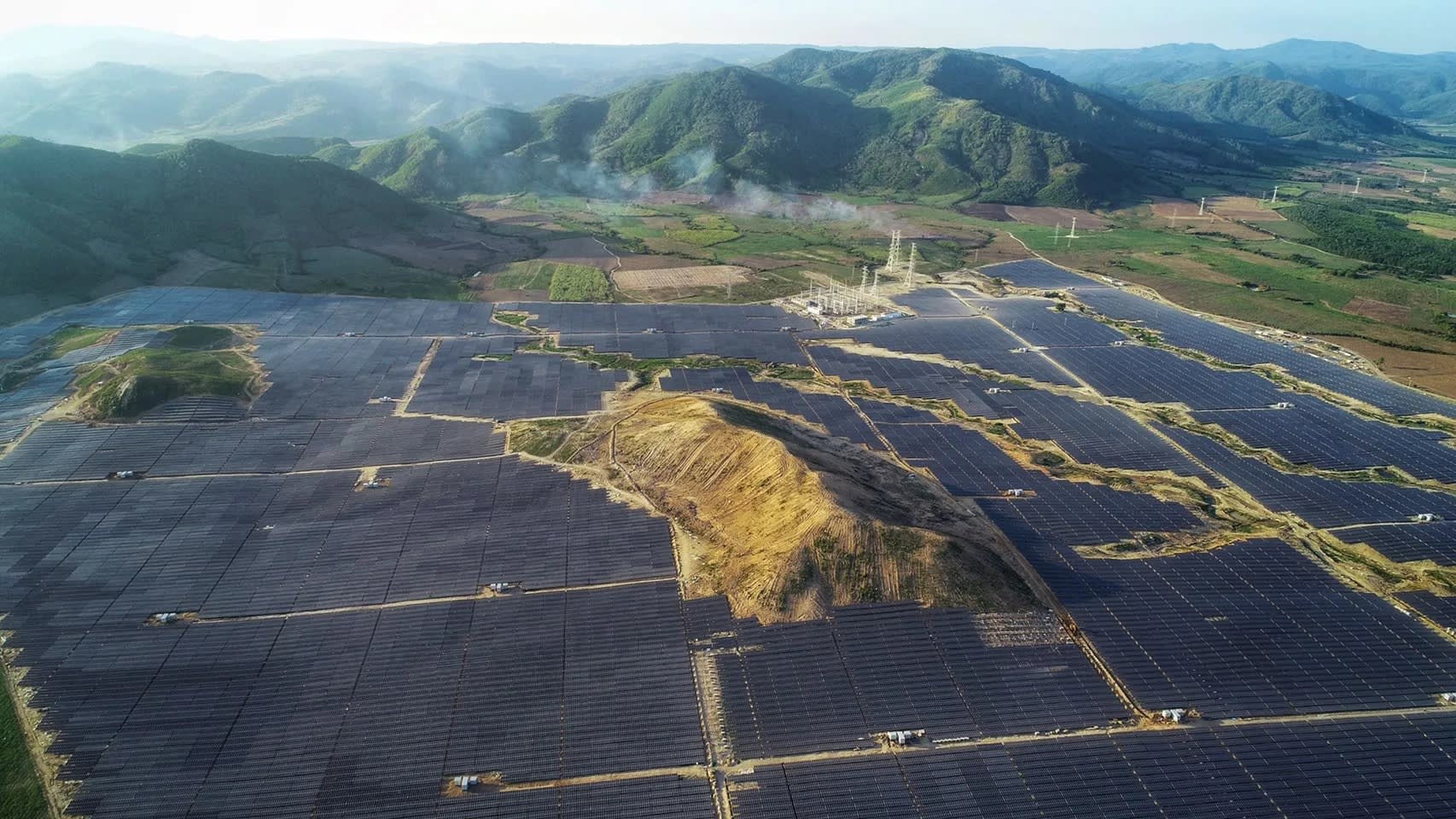 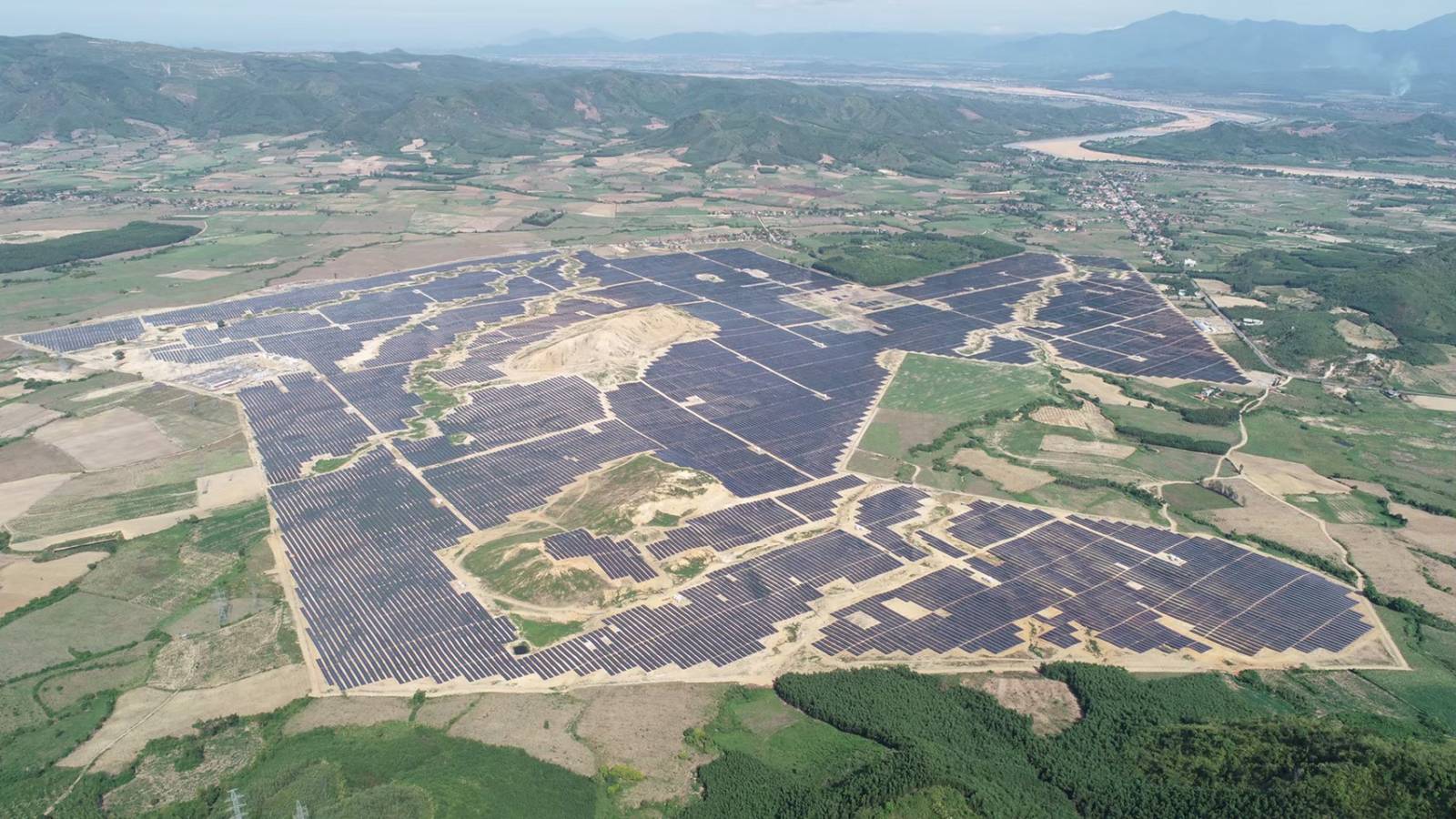 The two plants came online last month and will raise the share of solar in B. Grimm's energy portfolio to nearly 30%. That takes the company a step closer to its goal of more than doubling its power generating capacity to 5,000 MW by 2021 -- though new worries are emerging about its home market.

The 420-megawatt Dau Tieng plant in Vietnam's Tay Ninh Province and the Phu Yen solar plant, which has a 257 MW capacity, cover 504 hectares and 300 hectares -- making the first far the largest solar plant in Southeast Asia by area, closely followed by the second.

Investment in the two projects totals around $677 million, according to the company.

B. Grimm Power President and CEO Preeyanart Soontornwata is betting that Vietnam's appetite for energy, including renewables, will continue to grow by leaps and bounds.

"We see huge opportunities in Vietnam, considering the country's high GDP growth forecast above 6.5% and very strong [foreign direct investment] growth, which is likely to continue in the following years," Preeyanart told the Nikkei Asian Review. "The electricity demand is projected to hike to almost 130 GW in 2030 from less than 50 GW last year."

The government began supporting renewable energy in earnest two years ago when it shelved plans to go nuclear. While coal is likely to continue playing a significant role in the country's energy mix, there has been local resistance to some planned projects, and Hanoi is keen to boost the use of cleaner natural gas as a power source.

Completion of the plants comes as Vietnam is winding down its feed in tariffs for renewable energy more quickly than many other countries, industry insiders say. To qualify for the higher, Phase I rate of 9.35 cents per kilowatt hour for solar, B. Grimm's two plants had to be up and running by June 30.

B. Grimm's share price rallied 27% following the announcement that the plants had met that deadline. Investor sentiment was further buoyed by a consensus "forecast of record core earnings in 3Q19 driven by a full-quarter contribution from the solar farms in Vietnam," Bualuang Securities reported. The securities company projects a total revenue of 44.6 billion baht ($1.46 billion) for B. Grimm Power in 2019, and a net profit of 9.2 billion baht. B. Grimm Power now accounts for about 80% of the B. Grimm Group's profits.

B. Grimm's sunny outlook, however, was clouded somewhat on Thursday when Thailand's Ombudsman said the government's share of the country's total power capacity must be boosted to 51% in the next 20-year plan, casting doubt on several power plants B. Grimm had planned.

"So you can guess about why we have diversified to other countries," Preeyanart said of Thailand's uncertain energy picture.

"We just followed our schedule very closely, nearly every day," said Preeyanart, one of the few female CEOs in the energy industry. "We pushed very hard. Every plant we have built [excluding a mini hydro plant in Laos] we always completed before time and under budget. This project, too, was under budget."

B. Grimm signed a public-private agreement for the projects with Electricity of Vietnam comprising an assurance from the power distributor that it would provide transmission lines connecting to the main grid, a land lease agreement and a metering license, essentially proving that there would be a steady electricity flow. B. Grimm's two local partners -- who hold 20% of the Phu Yen project and 45% of Dau Tieng -- helped secure the land leases and other permits.

The new plants also benefited from their proximity to two hydro plants that are already connected to the national grid -- securing a transmission line to the grid is one of the key components of a successful renewable energy plant in Vietnam.

While the country's s energy grid provides 99% coverage, it has capacity challenges, especially in linking up to renewable power sources that tend to be in provincial rather than urban settings.

"The rate of growth of power demand is outstripping a) the government's capacity for investment and b) the capacity of the grid to move it," said Gavin Smith, director of Solar Power Utility Co., a subsidiary of the Dragon Capital Private Equity Fund that has been a major player in Vietnam's emerging economy. "The grid is not really in the right place for the new era of renewable energy."

Like B. Grimm, SPUC has recently opened a solar power plant in Vietnam. The Mui Ne plant in Binh Thuan Province has an installed capacity of 40 MW and began operating on June 4, after an eight-month construction period. The plant will generate approximately 68 million kilowatt-hours of electricity annually, contributing to 55,447 tons of CO2 emissions reduction per year, according to SPUC.

As for B. Grimm Power, the company says it still has some time to secure financing for its two solar plants.

"In Vietnam the reason we could build our plants so quickly was because Power China and Energy China had financial support," said Preeyanart. "If we had to wait for project finance, we would die," she said.

With B. Grimm buying Tier 1 panels and equipment, the two Chinese companies agreed to defer all payment until one and a half years after construction began. "So one year from now we have to pay them back by project finance, which has already attracted the interest of many banks," Preeyanart said.

B. Grimm Power has a powerful backer in its renewable projects in the Asian Development Bank, which became a shareholder in the company when it went public in 2017. ADB has also underwritten a 5 billion baht "green bond" for B. Grimm, and it extended a low-interest loan of $235 million to the company before becoming a shareholder.

Other companies venturing into Vietnam's renewables may find financing more difficult. The Vietnamese government has refused to provide guarantees for solar and wind projects, citing concerns over its growing public debt, which is close to its self-set ceiling of 65% of GDP.

"There are capacity issues, corruption issues and also financial issues," said Frederick Burke, managing director of Baker McKenzie (Vietnam), a global law firm that specializes in renewable energy projects. "The sponsors of solar projects expect a government guarantee for things the government controls, but every time we mention it [to government officials] they run out of the room, because they want to show the IMF and World Bank that they are not offering guarantees and thereby overextending their credit."

The lack of a government guarantee has not stopped B. Grimm Power, which perhaps has grown accustomed to such risks.

"Even in Thailand there is no government guarantee," Preeyanart said. "To be honest, we just have to trust [the Electricity Generating Authority of Thailand]. What else can we do?"

Such uncertainties aside, B. Grimm is betting that renewable energy, including solar and wind power, is here for the long term. "It has to be there," Preeyanart said. "It is also the future of the world, not just B. Grimm's future."